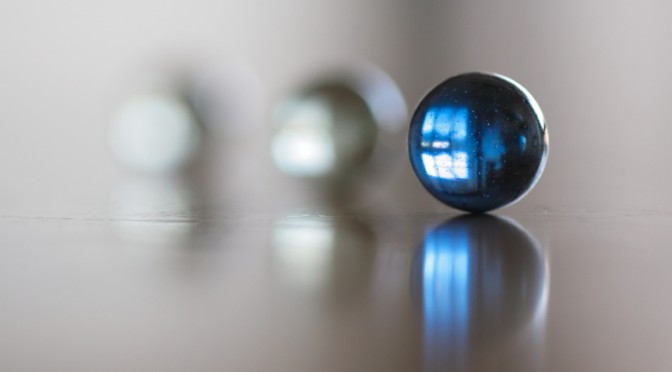 WHICH POVERTY DEFINITION IS THE RIGHT ONE?

Actually, none of them. Or, if you prefer, most of them. It all depends on how you plan to use them. We are better off thinking in terms of which one suits our given purposes best, rather than which one is ‘right‘. Let us explain. The task of poverty definition is not as straightforward as you might assume. It is one of those ideas that people THINK they understand, but struggle to express definitively, or even with that much clarity, when asked. Consider how we usually look to define words and ideas. It will typically involve looking in a dictionary, or perhaps visiting dictionary.com. Alternatively, you may be looking for an expert opinion in some well-known text book, if your area of interest is somewhat specialised. All these approaches indicate looking to some reference authority. The trouble is, there is no such reference authority for poverty.

Globally, many key bodies and institutions would see the World Bank as the closest thing to a reference authority on poverty – including the World Bank itself. They are the expert body that the UN typically refers to regarding such matters. Theirs, after all, is the default definition of poverty, based on the single indicator of standardised income (PPP), that gives us the idea of the ‘poverty line’ and the associated definitions of ‘the poor’ and those in ‘extreme poverty’. However, not all agree. St Clair (2006) states: “Knowledge for development and the eradication of global poverty is primarily in the hands of a transnational expert institution, the World Bank. Under pressure from critics on all sides, the Bank has responded by emphasizing its role as producer of policy-oriented knowledge for development. Yet views and prospects announced by the Bank are increasingly contested by critics from both left and right, from the local to the global arena. Critics tend to dismiss this institution’s knowledge, arguing it is politicized and simply a tool for the spread of neoliberal economic globalization, benefiting global elites.” 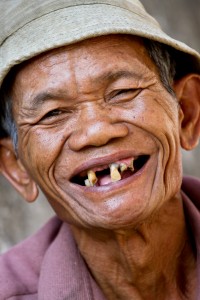 So, the World Bank’s official position might be to say that ‘income poverty’ is defined by the $2 and $1.25 a day figures, used to delimit the poverty line and extreme poverty line – notionally separating those falling either side of them. However, on their own web site, they recognise that poverty is a multi-dimensional phenomenon and that income is only a single variable by which to measure it. One might make the analogy of trying to measure how ‘smart’ someone is by their IQ. The World Bank currently states: “While much progress has been made in measuring and analysing income poverty, efforts are needed to measure and study the many other dimensions of poverty”. This is where we come in.

Don’t be too hasty to condemn us. Our view is that if the World Bank is considered by so many to be the global authority on poverty and it recognises that it is a multi-dimensional phenomenon, without stating definitively what those dimensions are – the topic thereby becomes ‘fair game’. So we set about the task. However, we did it with a very specific agenda. For us, this was not primarily an intellectual exercise, but a practical one. We wanted to define poverty, so that we would be crystal clear on the nature of the problem we were seeking to help overcome. It is a principle within IT management that: ‘You cannot manage what you do not measure and you cannot measure what you do not define’. In short: we wanted to better define poverty so we could better help solve it. 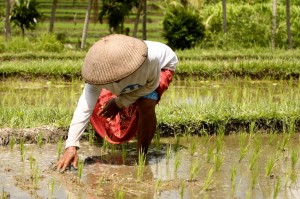 In that sense, we set about generating a definition we could USE; one that we could then MEASURE and hence employ to MANAGE poverty and its subsequent reduction. So we looked for other reasonable authorities on the topic, as starting points – and came up with 3. Those authorities were the Old Testament, Wikipedia and common sense.

Within the Bible, the book of Isaiah in the Old Testament is variously estimated to be between 2500 to 3000 years old. Our basis for using it is that the text of it has therefore been around for a long time. That does not thereby make it any kind of authority in and of itself, but something that had stood the test of time seemed a good starting point for any broad comparison. It also helped that the book of Isaiah was apparently considered a reasonably authoritative document by over a billion Jews, Moslems and Christians alike around the world. 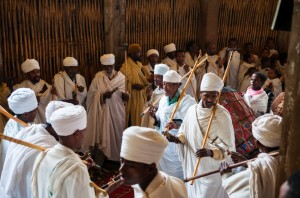 Until the Ikea Catalogue apparently knocked it from the number 1 slot recently, the Bible also held the title of the world’s most widely distributed book. So at least this reference would be reasonably familiar globally, as a quoted source. We couldn’t find any definitions of poverty in the Ikea Catalogue. By contrast, in Isaiah chapter 58, there is a list of descriptors, which we might recognise as pointers to relevant ‘dimensions’ of poverty: ‘when you see the naked…clothe them’; ‘provide the poor wanderer with shelter’; and ‘share your food with the hungry’. Whatever else you may believe about the book of Isaiah, you will have to admit that text has been around for a LONG TIME. Even longer than anything written by the World Bank.

So now let’s leap forward a few thousand years to the 21st century and Wikipedia. It’s own definition of absolute poverty is: “The deprivation of basic human needs, which commonly includes food, water, sanitation, clothing, shelter, health care and education”. Did you notice what we did? Yep, a fair bit of commonality with the full list from Isaiah chapter 58. At this point, we felt we were onto something useful. 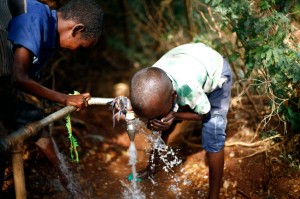 So we sanity checked it all with…‘Robinson Crusoe’ by Daniel Defoe . For those of you who like your references a little more modern, try Tom Hanks in the film ‘Castaway’ as a reasonable comparator. If neither of those work for you, then just imagine yourself suddenly stranded on a desert island and consider what your first order of priorities would be. In short, you would want to seek out those things that would preserve and protect your life, your health and your general wellbeing – probably starting with fresh water. We are not the first to think in this way. A guy called Thomas Maslow did too, when he was looking to figure out what motivated people. What he found was that it was different things to different people at different times – but that it was typically organised into a HIERARCHY for us all. So we thought about it, realised that his ideas stacked up (pun most definitely intended) and decided to borrow some of his great insights, incorporating them into our definition.

Thus, we now had a list of things that seemed vital for humans to survive and thrive. Rather than call them ‘human needs’ as Wikiipedia had done, we decided on ‘humanitarian basics’, as they were not all strictly ‘needed’ for human life, but helped define a list of aspects to what most would consider to be ‘humanitarian conditions’. Water, food and clothing were fairly straightforward, even though defining what constitutes ‘sufficient’ in those areas is a separate challenge. Then we hit the issue of a place to live. We liked the word ‘shelter‘, as it allowed for all kinds of accommodation, from a tent, through an igloo to the world’s most expensive mansion. Within this concept, we included the things that one might typically imagine associated with ‘shelter’ in an ideal environment worldwide, namely: fuel, sanitation and protection from the elements. Healthcare was again fairly self-explanatory, even though defining adequate healthcare levels on a global scale clearly has its challenges. However, the basic idea of a healthy human being receiving proper treatment is there. 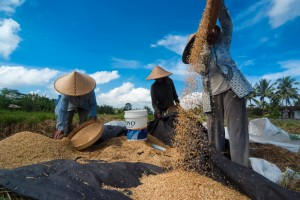 Then we come to Engagement. For us, this meant each person playing a full, age, gender and culturally appropriate role in their own community. While many might list access to education as a key human right, or humanitarian basic, that is primarily relevant for children. For adults, the issues of ‘engagement’ relate more to employment, opportunity, gender, religious and racial equality. For those with disabilities, the challenge of full engagement may be experienced more in the form of gaining equal physical access to all necessary facilities. Hence, for us, engagement is about far more than just education. It even has some potential overlap with our final ‘humanitarian basic’ layer: ‘freedom from oppression’.

Our thinking here reflects broader concepts of poverty, that consider the individual to be playing a full and free part in their relevant society. Such ideas are most fully expressed by the Universal Declaration of Human Rights. We recognised that this was potentially such a broad topic, that defining what constituted ‘poverty’ by this metric might prove extremely challenging. However, we considered it essential to include, because if you had globally excellent conditions by all the other 6 humanitarian basic measures, yet were still personally oppressed, that would be experienced as a tangible form of poverty, by most people’s subjective definition. Where oppression can imply the potential loss of virtually all other humanitarian conditions, together with threats to life, health and livelihood, then in our view, it must be included in the list of poverty dimensions. So it is.

MEASURING THE GLOBAL SCALE FROM WEALTH TO POVERTY

The last issue to address within our conception of poverty, was the idea of measurement. We realised that it would be both unworkable and misleading, to define each of our 7 Humanitarian Basics and give some arbitrary threshold for each one, as to what was ‘enough’ and what conversely constituted ‘poverty’. It is apparent that any amount that is insufficient would lead to some kind of threat to life, health, or personal wellbeing. Hence, there would indeed be some kind of threshold to be identified in each of the 7 areas, but that threshold would inevitably be different for different people. In short, the issue was ‘relative’, not absolute. This was when we imagined the comparison with human height. There was an absolute measure of human height (eg in feet, or metres), but a relative measure of all height understood as ‘tallness’, or ‘shortness’. In the same way, poverty might be hard to define in absolute terms, but easy enough to understand in relative terms. Hence, for us, poverty was most helpfully understood as the relative absence of the things considered necessary for humanitarian living. 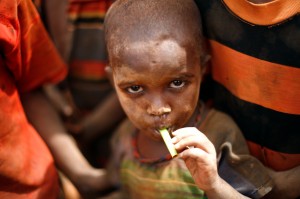 Thus, we arrived at our working poverty definition. It was a poverty definition designed from the outset to be used and useful. It incorporated both the ancient and modern viewpoints on poverty and their respective references to its significant dimensions. We have ordered the list into what we consider to be logical groupings, that are reasonably easy for a 5 year old to understand. Separately, outside the definition itself, we organised those 7 things into a hierarchy, in a recognition of Maslow’s own work and applied common sense. We have also coined the term ‘humanitarian basic’, rather than human need, as these dimensions of human living are not strictly ‘necessary’ as such – just basic to being treated humanely. And there you have it. That was how we arrived at our working definition of poverty as: “The relative absence of 7 Humanitarian Basics“. Or, in child-friendly language: ‘not enough of 7 things you need’. This became the starting point to the 7 Layer Poverty Model, which forms the hub and the heart of all else that you see here at Give A Billion.

We aim for a billion people to come to understand this definition globally in the 21st century. YOU are now one of them. So we thank you for being…